In the latest of the portmore empire saga... blak ryno has apparently responded to allegations of the shooting of his home...

all day long this empire a fall ....and it cant reach the bottom yet... SMH
5 comments: READ MORE HERE

This was a recent report on Kartel response to shooting up of Blak Ryno's house a day after he left the empire.... SMH!!!

Vybz Kartel a.k.a Addi the Teacha fiercely condemned the gun attack on the Waterford home of former Portmore Empire member Romane 'Blak Ryno' Anderson which was perpetrated by unknown persons on Thursday, February 25.
"I condemn today's shooting in Waterford, and I condemn any attack
made on Blak Ryno," states Kartel firmly. "Regardless of what
transpires between the Portmore Empire and Blak Ryno, whether or not he is a part of the Empire, I will not tolerate any acts of violence against him. ANYBODY who does ANYTHING to Ryno has to answer to me."

"I have no knowledge of the incident and I strongly condemn the attack. I express my sympathy and support to the Anderson family who may have been traumatised by this act," Vybz Kartel said in a release.

Vybz Kartel, who is the head of the Portmore Empire and chief executive officer of Adidjaheim Records, urged authorities to launch a full-scale inquiry into this deliberate act of intimidation and bring the perpetrators to book.

"I urge the authorities to act swiftly to deal with this unfortunate situation," he said.

Blak Ryno, who had been a member of the popular dancehall crew, the Portmore Empire, since January 2007, announced his decision to depart the crew on Wednesday of this week.

Blak Ryno
Word out is that Blak Ryno is the latest member of the Empire Crew to leave the group. This came on the heals of Kim's beating and leaving the group... and Lisa Hipe was sucked in a bad situation where the group asked her to leave. Still no word yet for Ryno's departure, but if you listen to Twins of Twins mix up.. they did indicate there was some sharing of the spoils issue. There are speculations of more internal problems that may have triggered him leaving. People are now looking forward for Jah Vinci to leave the group as he desired some time ago.
Life after Portmore Empire dont seem all that bad... infact one would say things have picked up for Lisa Hyper and KYM. No word yet of the remainder of the group- popcaan, shawn storm, sheba etc. It should be interesting to see how the rest of the chips fall and things turn out as 2010 rolls on.
2 comments: READ MORE HERE

Clashes at the Settlment Dancehall Show

The recent show that was staged at Links in St. Thomas over the weekend..put on by an undertaker called Tommy Thompson ..was actually burying dancehall according to some, as far as watered down and authentic of the clashes are concerned.
There were several clashes at the event that simply was befitting for a undertaker to finish the up the remains of the night.... there was a clash between Mr G aka Goofy and the graffiti artiste called LA Lewis.. and there was the Merciless vs Gabriel as well as Lisa Hyper vs Queen Paula ... all took place with a winner in each case based on the little crowd and their reactions. But for the real dancehall clash loving fans this was a formula for destruction of the business. But I do wonder because as far a clashes are concerned they contribute little or no benefit to dancehall in terms of progress of the genre..clashes have been going on for a very time with a few being friendly clashes and have several positive spin-off that can do anything for the music general the rest are non-friendly clashes the benefits here is the sound clash dublate frenzy. The clash usually turns out disappointing for some... and is generally unproductive in fact it may leave loosing artiste in the wilderness which is the objective at times, to end the career of one artiste... In a very few cases it can raise your stakes as with Kiprich he was asking for millions for a clash with Merciless... that didnt materialise. Ever since Kiprich finished General B and the monster empire his stocks had grown a bit... hasnt it?.. The undertaker said it wasn't worth it so he found Gabriel who stood his ground and perhaps got some creds and ratings for what he did to Merciless. Im not sure if Mr G will now be as popular as he was when he was Goofy ... the clashing of a 'nobody' i.e. LA Lewis should not count .. but it was personal, he had to, and he got paid for a couple of shows because of this...
Queen Paula took over from Face who was not satisfied with the lack of a formidable arrangement, so Paula benefited.
So ok there are benefits (more shows, dubplates etc) for the artiste where he/she wins in a credible clash.... but im not sure how far (eg as far as a Baby Cham level) it can go but surely is one of the platforms to the next level if he or she is not there yet. If you take a closer look at the clashes at this event (and you dont really have to because its obvious)... you could say dancehall loose.. for sure
No comments: READ MORE HERE

Beenie Man has been around a long time and indications are that he plans to stick around a bit longer than his rival Bounty Killer... Yes you cant say too much about Beenie without mentioning Bounty Killer and vice versa... this is the measuring criteria that was set by both artistes with their never ending rivalry over the past 20 years. It has been obvious for some time that Beenie Man has continued to put out music on a more consistent basis than Bounty Killer.
One of Beenie Man's latest tune "Swagga Mi Flow" ... could be another hit for him, time will tell, the tune has gotten the ingredients for grabbing the attention of the foreign masses... and its Beenie ..even though he doesn't have the current appeal as the alliance top duo Serani and Mavado ... he has his niche and he has been there.
Check out his official video for the track Swagga Mi Flow

And there was Gaza Slim... 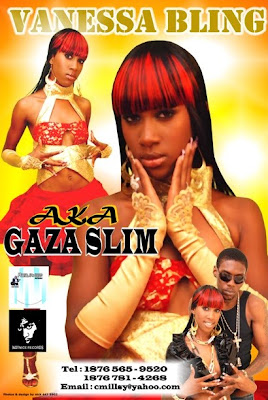 Gaza Slim and Kartel
And then there was Gaza Slim aka Vanessa Bling...you can google search her name you might not find much.. but what I can tell you she is the latest recruit on the Portmore Empire movement. She looks a bit better than what we normally see in the crew... she is slimmer than KYM that artiste formerly known as Gaza Kim ... and speculations are that this Miss Bling (no relation to Bling Dawg) should fill the void that KYM has left. She literally cant.. due to differences in body mass... and I'm not sure what she sounds like just yet.
We wish miss Vanessa Bling aka Gaza Slim all the best and advise her to brace herself for whatever is to come from this unpredictable set of artiste. Lets hope she can tek lick!! Mr Palmer please bear in mind that she is thin.. and therefore whatever blows were inflicted on KYM it cannot be of the same magnitude and force for Slim.
2 comments: READ MORE HERE

The true reggae and dancehall chart?

I knew it would be a matter of time b4 we start having people questioning the authenticity of the music charts in Jamaica. For the life of me.. I can't see such a small country .. though with a lot of music being produced everyday ... and a lot of charts reflecting mostly rotations and sales... would really have such diversity in the different charts... There were songs on Top ten ER charts on TVJ... prior Friday gone ..that was just stone dead wrong in my opinion. The whole thing looks revamped with the Stephen tune .."cant friend again" the new number tune.
I listen to the radios, go to sessions ... but I'm still uncertain about sales (ROFL...)... the only persons who benefit from dancehall music sales here in Jamaica are the guys that bootleg the CD's and sell them on the road side..., the sound systems and radio stations basically get them free..and the average Jamaican who listen to dancehall music and want a copy seem to take them from varuous websites all over the internet... or extract and listen on youtube among other sites. ..or buy the bootlegs on the streets
No disrespect to Alpha Rowen ..its just that his tune 'what can I do lord'... is the only track I can remember that was on the ER charts for weeks... and there were a number of artiste that were not even ever seen on the local soil, not played on local radio.. though I'm not omnipresent.. even the deaf could hear this s h i t .... Romeo's piece is better among them ... I just cant remember them at the moment... Oh!! big up yuh self floyd west yuh sound like one the Marley dem...
Anyway...Some blame payola... the Twins are amongst persons who openly criticise the modus operandi of the charts and radio stations disc jock... its simple, artiste pay to be played, pay to get tunes wheeled-up, to pull-up tunes...for artificial forwards, undeserved big ups and favourable comments.. artiste and producers pay for heavy rotations... even youtube sometime is criticised for artificially inflated views. So those with big money will always prevail under this system.

The charts in Jamaica are currently showing ..these tracks as the Number one dancehall tracks and Reggae tunes

and the few reggae charts no. 1's
Drive by - Nesbeth, True Friend - Demarco

as for outside of a Jamaica... "everything else weh come after Bob a bobby socks... ha ha haaa"
4 comments: READ MORE HERE