Thriller U moarns Death... Alley Cat down to 8 lives

It was unfortunate what happened to Thriller U's family this week. Condolences to him and his family. It has been reported that gunmen invaded premises in Miramar Florida where Thriller U's wife and daughter was attending a birthday party. Gunmen open fire on the event and when the dust was settled his daughter died and his wife seriously injured.
When things like this happen one has to wonder why and how. If it was in Jamaica there would have been foregone conclusions, because in deed the island can be a sad place.. just like anywhere else in the world.. but per capita its alarming.
We could have lost a few artiste this year but luckily we didn't ... Luciano 'jah messenger' had a close encounter and there were numerous near misses with motor vehicles accident with a lot of artiste and even big super star Usain Bolt. The latest this time round is Alley Cat. Cat apparently over the weekend was driving on a Main Road in Portmore when he had to swerve from animals crossing the thoroughfare ..and in turn almost swerved to his death. The vehicle, according to reports, was badly damaged with Cat leaving the scene with only a few scratch and bruises. .. He for sure no longer has nine lives left.
18 comments: READ MORE HERE

The war of words between Bounty Killer and Flippa Mafia may have subsided somewhat since we have not been hearing any new material from these artiste targeting each other. Though Flippa had his differences with Bounty.. there was some amount of sound off with him and other alliance members ..namely Mavado.
There are now diss songs from both Flippa Mafia and Elephantman targeting each other. Its very rear that a new artiste comes in the dancehall music business and starts by disrespecting one of the legends of dancehall Bounty Killa, and now he is moving along with more confrontation by dissing the likes of Elephantman.

There are early reports out of the Champion in Actions show that the Alliance team has teken it. Vybz Kartel one of the leading DJ of 2009 was only able to do 2-3 tunes as a the boos seemed to have discouraged the DJ from continuing. There were lots of forwards for Bounty Killer and the Alliance family. Beenieman had joined Kartel before his early exit and were chanting tune for tune.. until some reference to Gaza.. generated the Boos.
Champion in Action is an annual event put on by the so called President of west Kingston. The show's venue was at Jamworld, Portmore, Kartel's so called backyard.
This has not been a good week for the Gaza family.. especially Kartel who was trashed in about 2-3 tunes done by Bounty Killer, and Kartel response has been receiving poor reviews. Kartel earlier this week pissed of a number of fans in the Turks and Caicos islands when he didn't turn up for a show. According to Kartel his reason was due to incorrect down payment by the promoters.
This is not the first kartel has done something like this to the fans and promoters and I get the feeling it wont be the last. Its certainly should not be all about the money and if you can amicably sort out the thing and make it work then it should be all good for you. Not much different from the Boos he got at champion in action... the Big bad mighty Bounty Killer gets Boos very regular.. but he works through it.
No comments: READ MORE HERE

Vybz Kartel has responded to bounty Killa's chatta box .. with an almost line for line counteraction called Toilet Paper Bounty. The track according to the critics is relatively weak, not as catchy as the previous war tunes made by Kartel especially those he composed for the war with Mavado.
I have certainly heard better from the Teacha.. in terms of the melody and hardcore delivery. Perhaps the tune was not finished but one thing for sure the lyrics stings ..
There are talks of reputation and general reuse of material.. well its either that or they are going to be telling lies on each other...which is usually done in the dancehall far more often than the actual factual situations..
But if this is the finished track then the Ground God takes the first round..
1 comment: READ MORE HERE 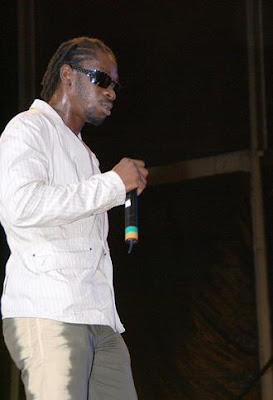 Bounty Killa is now officially Cross, Angry and Miserable again but this time at the leader of the Portmore Empire aka Gaza.. Vybz Kartel. In a fresh diss track called "Chatta Box" Bounty Killa unleashed his familiar war like tone and socked Kartel in the face. Though there are insinuations as to why Bounty took so long to respond to Kartel previous prnouncements and that some aspect of the new tune is from the old Spragga Benz and Mavado diss tracks. CLICK HERE TO READ MORE
No comments: READ MORE HERE 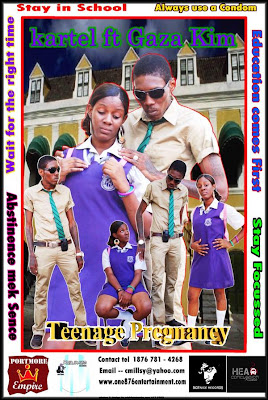 Vybz Kartel is at it again with his 'on the boarder controversial style of tunes. He has at least three new tunes which area again combinations with female artistes.
The latest one is Teenage Pregnancy which on the lips of the debate enthusiasts. The tune is a collaboration between Gaza Kim and Vybz Kartel. Gaza Kim is apparently a 17 year old youngster out of school and was introduced to Kartel though his wifey..shorty. Captivated by the voice on the CD the DJ as usual pulled a fast one from the head and penned Teenage Pregnancy. The tune has the gully fans calling Kartel PDF file and all these things, one reporter indicated that he has gone a bit too far and that the Rampin Shop should have been enough. This one is right on the heels of "Virginity".. and artiste like Queen Ifrica is not at all amused.. and thus build a counteraction to Kartels recent flurry of tracks that are deemed to be outrageous and inappropriate with a tune called "No Bwoy" in which she called a number of the Kartel track names like rampin shop, virginity etc. which some is tantamount to a diss.. I say she teaching the Teacha. The 4 minute track basically saying that abstinence is the best way .. and those who are going after the young ladies should work on themselves instead..
The camp has responded with a poster shown above with the messages of "stay in school", "wait for the right time", "education comes first" .."Use a condom" ..etc.
Im not sure if the critics will accept this as some form of redemtion for the DJ..

But I say, this is from a man that did "Dutty Panty"... "Tek Buddy Gyal" and "Sweet to the Belly" .. you can expect things along that kind of genre.. "Completely" aka "Come Breed ..." are mild compared to the tunes above mentioned. If you have been listening dancehall over the last ten years you will know what to expect from a man like Kartel.. and these two tunes are right up there in what he loves to do.. The Rampin Shop was a success with billboard and all, we are not quite sure if Kartel is making another attempt here by making these songs just as provocative for debate and general discussions. Already completely is number one on at least one chart.. and chances are Teenage Pegnancy might follow .. and also follow the route of Rampin Shop..


Mrs. Tyson need to say her piece on these to get them really down the controversial and debate ally.. and yeah Kartel just might have another set of hits on his hands. Well its either this or the Vybz..Rum Street Vybz business
2 comments: READ MORE HERE